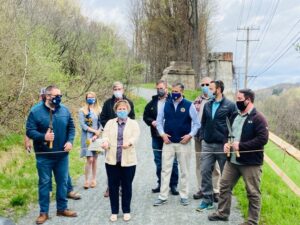 April 19, 2021 —— Between 2016 and 2018, Countryside Conservancy received grant funding from both the Commonwealth of Pennsylvania, Commonwealth Financing Authority Greenways, Trails, and Recreation Program and, The Pennsylvania Recreational Trails Program, Federal Highway Administration and the Bureau of Recreation and Conservation. Cabot Oil & Gas Corporation then worked with the Conservancy and coordinated many other partners to provide match for those monies enabling a complex project to take shape and be completed. Lackawanna and Wyoming County Commissioners, as well as Dalton Borough, Factoryville Borough and La Plume Township also lent their support. Through the design consulting services of Tim Wilson of BCM Engineers and Tioga Environmental Consulting LLC, and the construction services of Sugar Hollow Water Services, LLC, and Dan Rutledge of Rutledge Excavating Inc., Countryside is proud to unveil over a half of mile of trail that begins at Cherry Street in Dalton and concludes at W. La Plume Road in La Plume Township. Additionally, Trail -head work at Factoryville along with installation of signage there, was also carried out. The Overlook Estate Foundation provided funding for the custom historical signage at both locations.

From 1908 to 1932, the Northern Electric Street Railway operated trolley service from Scranton through the towns of Chinchilla, Clarks Summit, Glenburn, Dalton, La Plume, Factoryville and the Lithia Valley to the resort community of Lake Winola. The Trolley also operated a line that traveled from Factoryville, through Nicholson and ending just short of Montrose in Susquehanna County. After the trolley line ceased operations and the company filed for bankruptcy, James K. Peck acquired much of the remaining right-of-way segments. Rosamond “Roz” Peck, one of the original founders of Countryside Conservancy, became interested in the idea of converting the former right-of-way into a non-motorized community recreational trail. The Conservancy has now constructed a total of 5.4 miles of Trolley Trail. 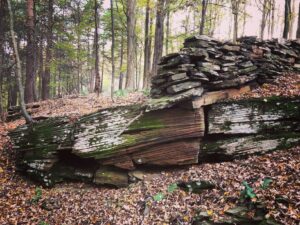 March 23, 2021 —— After nearly 20 years of relationship building and three years of more serious negotiating, Countryside Conservancy finally acquired the 65-acre Rowlands Farm in North Abington Township. Funds from PA Department of Conservation and Recreation and the Willary Foundation, along with a generous bargain sale from the Rowlands Family made this acquisition possible. Considered to be one of the last large parcels of undeveloped land along the eastern half of Lackawanna State Park, the Rowlands Preserve shares a half-mile border with the State Park, two borders with lands protected by agricultural easements, and another border with land protected by a conservation easement held by the Conservancy.

“It was a prime property to be protected and to enhance the footprint of the state park,” Kern said.

The conservancy was awarded nearly $167,000 through a grant from the state Department of Conservation and Natural Resources’ Community Conservation Partnerships Programs to acquire 65 acres for passive recreation and connection to other protected lands in North Abington Twp.

“It was huge because I was looking at having to put together possibly three or four different funding sources and they came up big for us,” he said.

The Rowlands family issued a statement regarding the sale of the property at a discounted price.

“Our family’s history is strongly connected to this beautiful land,” they said in the statement. “Almost a hundred years ago, William and Marion Rowlands came here and carved out a life running a dairy farm and raising their large family. We are pleased to pay tribute to their memory and to see ‘The Rowlands Preserve’ forever protected from any type of development while seeing it shared with others who can appreciate its beauty as we always have.”

Countryside Conservancy plans to build a new trail on the Rowlands Preserve in the coming months.

Bill Kern, executive director of the conservancy, said work on the approximately 1½-mile hiking and biking loop, which will connect with the state park system, should begin later this spring and is expected to be completed by the fall.

The conservancy, established in 1994, has protected nearly 1,500 acres of land and water in Northeast Pennsylvania.

Kern thinks users will enjoy the majestic views from the new section of trail.

“I believe it will be the highest point in the whole park system,” he said. “There is a field on top, so there will be a really beautiful view of the surrounding hillsides.”

There are no upcoming events at this time.